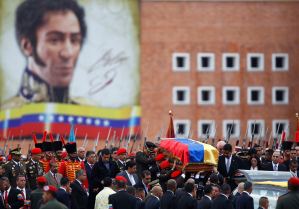 Pallbearers carry the coffin of Venezuela’s late President Hugo Chavez to a hearse prior to a funeral parade in Caracas March 15, 2013. Hundreds of thousands of Venezuelans were on the streets again on Friday at a funeral parade for Hugo Chavez amid opposition protests that the government was exploiting his death for election purposes. Chavez’s remains were being transported for about 12 miles (20 km) through Caracas from an army academy to a military museum on a hillside where the former soldier launched his political career with a failed coup in 1992. REUTERS/Carlos Garcia Rawlins (VENEZUELA – Tags: POLITICS OBITUARY ELECTIONS TPX IMAGES OF THE DAY)