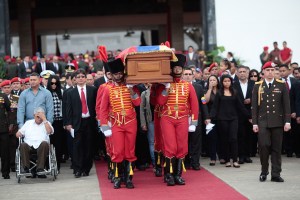 Handout picture released by the Venezuelan presidency of the coffin with the remains of late Venezuelan President Hugo Chavez being taken from the Military Academy to former 4 de Febrero barracks in Caracas, on March 15, 2013. The body of Chavez was moved Friday to the barracks in a final march to honor of the leftist leader a month before elections are held to pick his successor. The Caracas military academy, where Chavez’s casket has been on view, served as the starting point for the procession escorting the remains of the 58-year-old, who last week succumbed to cancer after 14 years in power. AFP PHOTO/PRESIDENCIA/MARCELO GARCIA/HO RESTRICTED TO EDITORIAL USE – MANDATORY CREDIT “AFP PHOTO/PRESIDENCIA/MARCELO GARCIA/HO” – NO MARKETING NO ADVERTISING CAMPAIGNS – DISTRIBUTED AS A SERVICE TO CLIENTS