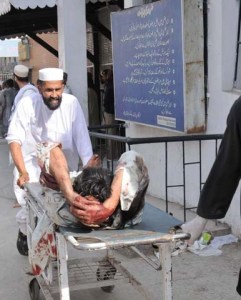 PSH02. Peshawar (Pakistan), 13/04/2013.- A man who was injured in a bomb explosion is rushed to a local hospital for medical treatment, in Peshawar, the provincial capital of militancy-hit Khyber-Pakhtunkhwa province, Pakistan, 13 April 2013. An explosion tore through a commuter van in Peshawar, on 13 April, killing at least nine people and injuring 16 others, officials said. EFE/EPA/ARSHAD ARBAB