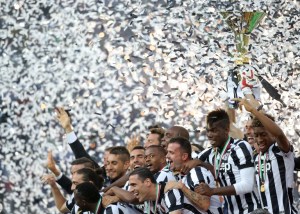 Juventus’ players celebrate with the Italian League’s trophy during a ceremony following the Italian Serie A football match Juventus vs Napoli on May 23, 2015 at the Juventus stadium in Turin. Juventus won the Coppa Italia on May 20, 2015 and the Italian League today after their 3-1 victory over Napoli. AFP PHOTO / MARCO BERTORELLO