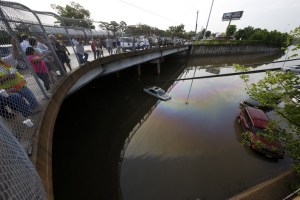 Vehicles are left stranded on a flooded Interstate 45 in Houston, Texas on May 26, 2015. Heavy rains throught Texas put the city of Houston under massive ammounts of water, closing roadways and trapping residents in their cars and buildings, according to local reports. Rainfall reached up to 11 inches(27.9cm) in some parts of the state, national forecasters reported, and the heavy rains quickly pooled over the state’s already saturated soil. AFP PHOTO/AARON M. SPRECHER