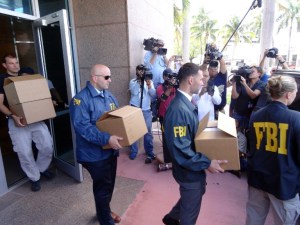 FBI agents take boxes with documents from the headqueartes of the CONCACAF soccer organization after a raid on May 27, 2015 in Miami Beach, Florida. The US Justice Department announced conspiracy and corruption charges against nine FIFA officials and five business executives Wednesday, after Swiss authorities arrested seven suspects based on the indictments. At the same time as the indictments were unsealed, authorities raided the Miami headquarters of the CONCACAF soccer association, which coordinates the sport in North and Central America and the Caribbean. AFP PHOTO/DIEGO URDANETA