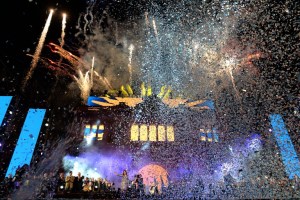 Fireworks are thrown up in the air as Argentine President Cristina Fernandez de Kirchner (C) and supporters gather at Plaza de Mayo square in Buenos Aires on May 25, 2015, to commemorate the 205th anniversary of the May Revolution. An uprising on May 25, 1810 here, at Argentina’s capital main square, sparked a revolution that led to the country’s independence from Spain years later. AFP PHOTO / ALEJANDRO PAGNI