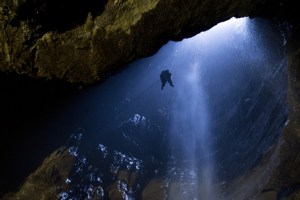 A member of the public is winched to the surface after visiting the Main Chamber of Gaping Gill, the largest underground cavern in Britain naturally open to the surface, near Ingleton, northern England on May 26, 2015. At a depth of almost 100 meters from the surface, and with a volume comparable to the nave of York Minister, trips into Gaping Gill cavern are offered twice a year to members of the public alternatively by Bradford Pothole Club and Craven Pothole Club. AFP PHOTO / OLI SCARFF