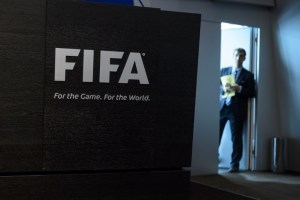 A staff waits prior to a press conference at the FIFA heaquarters on May 27, 2015 in Zurich. Swiss police on Wednesday raided a Zurich hotel to detain six top football officials as part of a US investigation into tens of millions of dollars of bribes paid to sport leaders, Swiss authorities and media reports said. AFP PHOTO / FABRICE COFFRINI