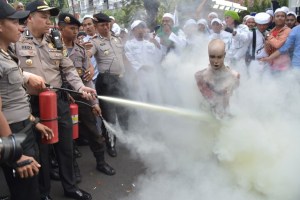 Indonesian policeman extinguish a burning effigy of a Buddhist monk during a protest in support of Rohingya Muslims from Myanmar by hardline Muslim group Front Pembela Islam (FPI) or the Islamic Defender Front together with Forum Umat Islam (FUI) outside the Myanmar embassy in Jakarta on May 27, 2015. The migrant crisis in Southeast Asia has shone a spotlight on the dire conditions and discrimination faced by the roughly one million Rohingya in western Myanmar, a group widely seen in the country as illegal immigrants from Bangladesh. AFP PHOTO / ADEK BERRY