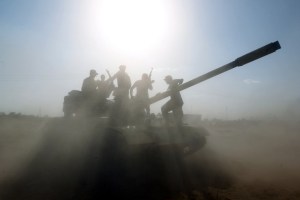 Iraqi army tanks get into position on the outskirts of Baiji refinery north of Tikrit, during a joint operation between the army and popular mobilisation units to retake the remaining area of the Baiji oil refinery from Islamic State (IS) group jihadists, on May 24, 2015. The Islamic State group has executed 16 Iraqi traders taking food from the city of Baiji to the government-controlled western city of Haditha, officials said. AFP PHOTO / AHMAD AL-RUBAYE