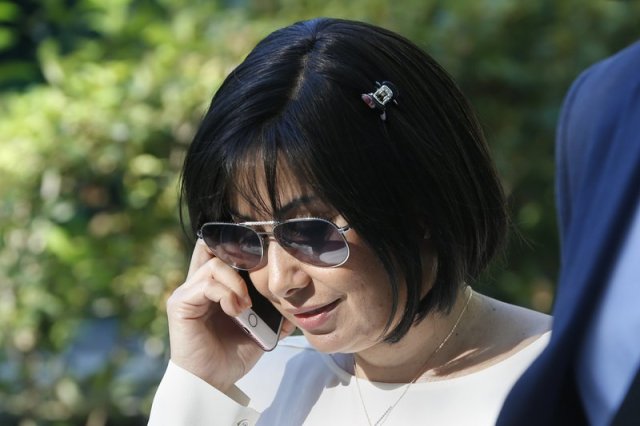 In this Sept. 24, 2018 file photo, Claudia Patricia Diaz Guillen, the former nurse of late Venezuelan President Hugo Chavez, leaves the national court in Madrid, Spain, where she fought and won a case of extradition at Venezuela’s request for alleged money laundering. It was 2014 when Diaz, then Venezuela’s former treasurer, was looking for a safe haven to store the unexplained wealth she had accumulated over the years, and allegedly turned to one of the oldest ways of moving vast sums of money anonymously: buying gold. Photo – AP: Paul White

In a story August 3, 2020, about a Venezuelan official allegedly hiding unexplained wealth by buying gold, The Associated Press erroneously reported some financial information about the Switzerland -based Compagnie Bancaire Helvetique SA. The bank’s assets under management for clients located in Latin America and the Caribbean accounted for 19% of its business last year. A corrected version of the story follows:

It was 2014 and Venezuela’s former treasurer Claudia Díaz was looking for a safe haven to store the unexplained wealth she had accumulated over the years. Then president Hugo Chávez, who she once served as a nurse, had recently died and with the election of Nicolás Maduro, the nation’s politics and relations with the U.S. were in tumult.

So Díaz allegedly turned to one of the oldest ways of moving vast sums of money anonymously: buying gold.

In quick succession a shell company established in the Caribbean island nation of St. Vincent and the Grenadines that she allegedly controlled purchased 250 gold bars valued at more than $9.5 million, according to court records from Liechtenstein obtained by The Associated Press. The bars, weighing a kilogram (2.2 pounds) each, were allegedly stored at a private vault in the tiny European principality available to Díaz and her son after his 18th birthday. A few years later, a nearly identical amount of bullion was apparently sold by a representative of Díaz, with much of the proceeds deposited into a Swiss bank.

Those transactions are now at the center of an international criminal investigation into the network of shell companies and dodgy Swiss bankers that have helped turn Venezuela into one of the most corrupt countries in the world. While as much as $300 billion is estimated to have been raided from Venezuela’s state coffers in two decades of socialist rule, investigators’ understanding of how the dirty money was laundered is still emerging. The physical transfer of heavy gold bars – something previously unseen in court records – underscore the creative lengths to which some Venezuelans have gone to hide their stolen wealth.

With a reputation for secrecy and the world’s highest income per capita, the German-speaking microstate of Liechtenstein has long been a banking magnet for the world’s uber-rich. But like neighboring Switzerland, with whom it shares a currency and customs union, its reputation as a freewheeling offshore financial center has been rocked by scandal. Spurred by pressure from the U.S., which has indicted numerous Venezuelan officials and sanctioned Maduro’s government for financial crimes throughout the world, the two countries are now doing their utmost to expose corruption in Venezuela.

“Venezuela has become a virtual pariah,” said Michael Levi, an expert on financial crimes in Europe and professor at Cardiff University in the U.K. “Tight-lipped bankers were happy to take their money for years but now everybody is avoiding the country at all costs not just to protect their reputations but to avoid regulatory and even criminal penalties.”