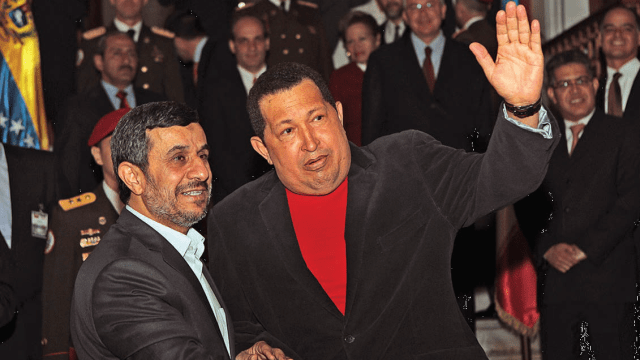 Colombian President Iván Duque raised eyebrows in August 2020 when claiming that the regime of Venezuela’s Nicolás Maduro was seeking to acquire medium-to-long-range missiles from the Islamic Republic of Iran. The claim came within the context of increased Tehran-Caracas commercial cooperation in 2020, sending upward of 2.35 million barrels of gasoline to the Maduro regime in exchange for no fewer than 9 tons, or $500 million worth, of gold to Iran.

At first look, this commercial exchange appears to be transactional and opportunistic, based on the necessity of both regimes. Upon closer examination, however, this commercial cooperation has military dimensions and is layered over a network of front companies from Iran’s clerical army, the Islamic Revolutionary Guard Corps (IRGC). Beyond opportunistic, Iran and Venezuela have formed a mutually beneficial strategic partnership that serves to fortify the Maduro regime and diminish Iran’s natural geographic disadvantage with the United States.

Iran was active in Venezuela prior to the rise of Hugo Chávez at the turn of the century. Yet, its presence was largely constrained to cultural, diplomatic, and perhaps intelligence activity. During Chávez’s tenure, Iran’s role in Venezuela increased to include a military relationship that was far from transparent.

From 2004 to 2013, Iran signed several energy and military cooperation agreements with Venezuela. Most of these agreements were overvalued, under delivered, and never materialized from a commercial perspective. They did, however, serve a strategic purpose in helping Iran circumvent international sanctions and the 2007 U.N. arms embargo. According to a former U.S. Treasury undersecretary, “Iran attempts to shield its procurement activities behind a maze of entities, essentially hoodwinking those still doing business with Iran into facilitating illicit transactions for the transport of dual-use, missile-related items.”

“Iran attempts to shield its procurement activities behind a maze of entities, essentially hoodwinking those still doing business with Iran into facilitating illicit transactions for the transport of dual-use, missile-related items,” former U.S. Treasury undersecretary.”

Part of Iran’s global illicit procurement network is nested in Venezuela. A binational fund, bank, and credit line was established between Iran and Venezuela, to give the Islamic Republic a larger financial footprint in Latin America. Conservative estimates, adding up the stated values of known joint ventures, capitalizations, loans, and investments, indicate that the Iranian regime accessed upward of $16 billion through the Venezuelan financial system during this time frame. This was done through some 270 bilateral agreements derived from more than 60 projects and 80-plus Iranian companies in Venezuela. A fraction was used on joint military projects that, at the time, were heavily sanctioned by the United States and Europe for its potential dual use in Iran’s strategic weapons programs.

These joint military projects managed by Iran’s Ministry of Defense and Armed Forces Logistics (MODAFL) and Venezuela’s military company CAVIM shielded the financial transactions of the Iranian sanctioned entities through Venezuela’s oil industry. A slew of IRGC-related front companies began operating in Venezuela, including Parchin Chemical Industries, which was prominently listed in U.N. Security Council Resolution 1747 as an entity involved in Iran’s missile and weapons of mass destruction (WMD) programs. For its part, Qods Aviation, another sanctioned IRGC front company, arrived next to the El Libertador airbase in Maracay, in the Venezuelan state of Aragua, to teach Venezuela’s military how to produce unmanned aerial vehicles (UAV). The following diagram illustrates only a small part of the Venezuela-Iran military industrial complex that managed joint projects on UAVs, jet aircraft engines, ammunition manufacturing, and helicopter parts, establishing a sanctions-evasion scheme back during the Chávez years that is a precedent for Iran’s “commercial” activities in Venezuela today.

The passing of Chávez in 2013 brought some speculation that strategic ties between Tehran and Caracas were on the decline. That is incorrect. After a two-year transition period, the Iran-Venezuela joint cooperation started up again in 2015, when Maduro visited Tehran twice, and in 2016, when Hassan Rouhani took his first and only trip to Venezuela for an annual summit of the Non-Aligned Movement on Margarita Island. An array of bilateral agreements was signed between the two countries in science, nanotechnology, oil, and agriculture.

By 2017, the IRGC was using Venezuela as a transshipment hub for strategic minerals, metals, materials, and technology it acquired from throughout Latin America in support of its growing weapons and WMD programs back in Iran. More importantly, Iran marked 2020 on the calendar back in 2015 after signing the Joint Comprehensive Plan of Action (JCPOA). Iran understood it only had a few years to legitimize its “commercial” footprint in Venezuela if it wanted to capitalize on the expiration of the U.N. arms embargo on October 18, 2020.

While Iran reaped the financial benefits of the JCPOA nuclear deal, Venezuela’s economy plunged toward collapse. Despite sitting on one of the world’s largest oil reserves, Venezuela faced massive fuel shortages. This opened the door for Iran in 2020 to send fuel, food, technicians, and even open its first supermarket in Caracas, legitimizing its seemingly innocuous commercial activity to build-up its military presence in the future. In 2020, Iran erected an air and sea bridge across the Atlantic that relies on an IRGC network in third party countries creating multiple routes between Iran and Venezuela. An example is Algeria and Serbia as refueling stops for the air route and South Africa as an alternate circumnavigation point for the sea route between Iran and Venezuela.