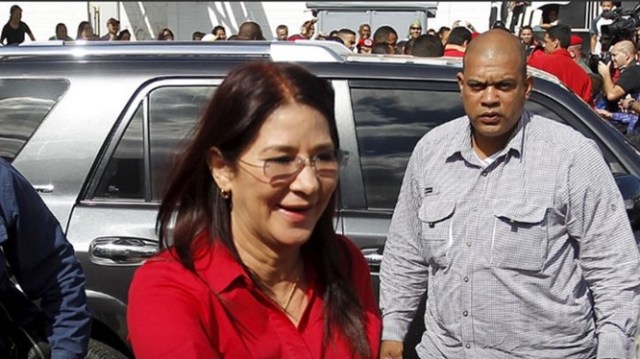 First lady Cilia Flores has a long record as a power broker in Venezuela. Now, with the help of a jailed former bodyguard, U.S. prosecutors are preparing to charge her with crimes that could include drug trafficking and corruption.

Four years ago, a bit player in the Venezuelan leadership was arrested in Colombia and extradited to the United States to face drug charges. He proved to be an important catch.

Now, with help from Lamas’ testimony, the United States is preparing to charge Flores in coming months with crimes that could include drug trafficking and corruption, four people familiar with the investigation of the first lady told Reuters. If Washington goes ahead with an indictment, these people said, the charges are likely to stem, at least in part, from a thwarted cocaine transaction that has already landed two of Flores’ nephews in a Florida penitentiary.

Nicole Navas, a spokeswoman for the U.S. Department of Justice, declined to comment on any possible charges against Flores. Flores and her office at the National Assembly didn’t respond to questions for this article. Jorge Rodríguez, Venezuela’s information minister, told Reuters in a text message that its questions about the possible U.S. indictment of Flores were “nauseating, slanderous and offensive.” He didn’t elaborate.

In a series of interviews with Reuters, the first Lamas has given since his arrest, the former bodyguard said Flores was aware of the coke-trafficking racket for which her two nephews were convicted by a U.S. court. Flores also used her privileged position, he said, to reward family members with prominent and well-paid positions in government, a claim of nepotism backed by others interviewed for this article.

Speaking behind reinforced glass at the prison in Washington, D.C., where he is detained, Lamas told Reuters he is speaking out against Flores because he feels abandoned by the Maduro administration, still ensconced in power even though many of its central figures, including the president, have also been accused of crimes. “I feel betrayed by them,” he told Reuters.

In late March, U.S. prosecutors indicted Maduro and over a dozen current and former Venezuelan officials on charges of narco-terrorism and drug smuggling. Maduro, now in his eighth year as Venezuela’s president, for years sought to flood the U.S. with cocaine, prosecutors alleged, seeking to weaken American society and bolster his position and wealth.