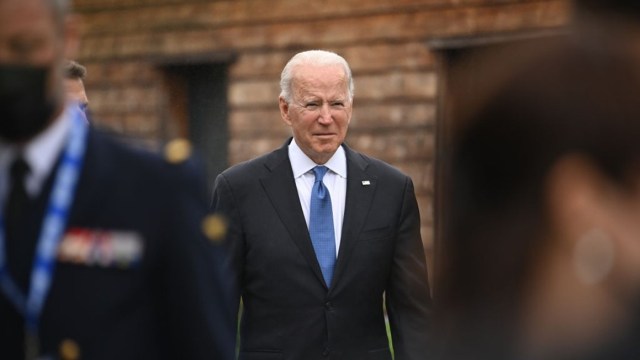 Two Iranian warships are steaming across the Atlantic, and putting the U.S. president in uncomfortable waters.

Last summer, a troubling report drew alarm in Washington national security circles: Venezuela was considering entering a new arms deal with Iran, one that could include long-range missiles capable of reaching the United States.

Venezuelan ruler Nicolas Maduro joked that such a purchase was a “good idea.” But the Trump administration warned Caracas to abandon it, threatening in particular to eliminate any long-range missiles.

Today, U.S. officials worry that two Iranian Navy ships slowly steaming across the Atlantic might be carrying the arms Venezuela was alleged to be eyeing a year ago. And now it’s the Biden administration warning Caracas to reject the delivery, saying ominously that the U.S. will take “appropriate measures” if needed.
“I am absolutely concerned about the proliferation of weapons, any type of weapons, in our neighborhood,” Defense Secretary Lloyd Austin said Thursday in response to lawmakers’ questions about the ships, becoming the first Biden Cabinet member to speak publicly on the issue.

It’s not 100 percent clear what the Iranian ships are carrying – though there is some photographic evidence that the cargo may include fast-attack boats, which can be armed and which Tehran has frequently used to harass U.S. ships in the Persian Gulf. Much of the cargo is covered up, leaving officials and analysts to speculate.

It’s also unclear how far the United States will go to stop the ships beyond pursuing quiet diplomacy in Latin America and issuing public statements. The closer the ships get, however, the more obvious it seems that Iran and Venezuela want to see how far they can push Joe Biden — even though the new president has signaled he may lift some sanctions on both countries, including through nuclear talks with Iran.

“They are testing the new administration to see what it does,” said Eddy Acevedo, a former Republican congressional aide who specialized in Latin American and Middle Eastern issues and is now with the Woodrow Wilson Center. “Iran is looking for leverage for nuclear talks, and the Venezuelan regime is trying to push the U.S. into providing sanctions relief ahead of talks with the Venezuelan opposition.”

What’s also clear, according to some analysts and former U.S. officials, is that Tehran and Caracas are continuing to expand their bilateral links and military cooperation in the face of U.S. hostility. In the long run, such cooperation by America’s adversaries – a group that also includes Russia and China – could weaken America’s ability to shape their behavior through sanctions and other means.

For Venezuela, whose economy under Maduro has largely collapsed, Iran is a helpful resource for everything from gasoline to groceries, as well as advice on how to dodge U.S. sanctions. For Iran, whose enmity with America goes back more than 40 years, the Venezuela connection is another way to defy Washington in its own hemisphere while promoting its Shia Islamist ideology beyond the Middle East. U.S. officials in recent years have grown increasingly concerned about influence in Venezuela of Iran’s Islamic Revolutionary Guard Corps and the Tehran-backed Shia Muslim militia Hezbollah.

“To send their Navy suddenly to the southern Atlantic – it’s basically saying [to the U.S.],‘You’ve been zipping up and down the Strait of Hormuz and the Persian Gulf for the past four decades. We’re going to do the same to you,’” said Emanuele Ottolenghi, a senior fellow with the hawkish Foundation for Defense of Democracies.

As of Friday, the Iranian ships appeared on course, heading northwest in the Atlantic, according to a defense official. The ships – the Makran, a former oil tanker converted to a forward staging base, and the Sahand, Iran’s newest frigate – are about 4,000 miles away from Venezuela, if that’s their destination. Iranian officials have confirmed the ships are in the Atlantic. The United States, meanwhile, is privately urging Venezuela, Cuba and other countries in the region to refuse the ships permission to dock, people briefed on the topic said.

In response to reporting from POLITICO, a senior Biden administration official indicated Wednesday that the U.S. believes the ships may be carrying arms agreed to in the alleged Venezuela – Iran deal last year. The official did not specify the types of weapons that may be on board or whether the U.S. considers fast-attack boats a “weapon.” The official also did not say whether the weapons pose a direct threat to the United States, but said they could be a threat to America’s partner countries in the hemisphere.

The White House on Friday declined to answer more than a dozen questions from POLITICO about the situation.

Former U.S. officials declined to delve into details of what the United States believed Iran and Venezuela were discussing in terms of an arms deal a year ago, some of which is classified. But they confirmed that there was alarm in Washington about the possibility of a transfer of missiles, especially long-range ones. Even if the fast-attack boats are the most important part of the deal, those still can be used in a weaponized way, former officials and analysts noted.

Some critics slammed the Biden administration for what they felt was a weak public response to the ships’ movements.

“This is clearly an escalation and it’s very public, and I think meant to publicly embarrass the Biden administration during [nuclear] negotiations,” said Simone Ledeen, who was responsible for Pentagon Middle East policy in the Trump administration. “Frankly, a lot of us are shell-shocked watching this take place. If we’re not going to respond to this, what are we going to respond to?”

A former U.S. diplomat familiar with the issue said Iran has on multiple occasions tried to send various types of military equipment, including possibly weapons, to Venezuela – sometimes by using aircraft. But the U.S. has tried different maneuvers to derail those transfers – such as by convincing other countries to temporarily bar the Iranian flights from their airspace – and it’s not clear how many have managed to get through or what exactly was handed over.