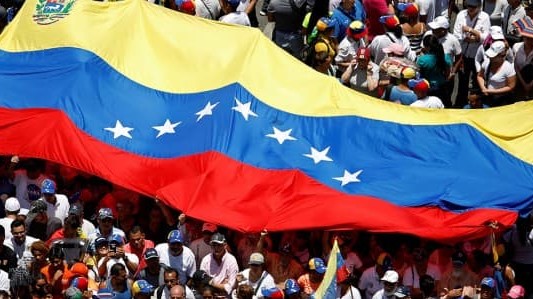 After more than 15 years of U.S. sanctions which caused Venezuela’s one mighty petroleum industry to collapse, the crisis-driven Latin American state now appears on the verge of failure. More than two decades of autocratic socialist rule, which started with Chavez’s 1999 Bolivarian revolution, have gutted what was once South America’s most stable democracy and richest country. Venezuela is at the tail end of what is described as the worst economic decline of modern times ever to occur outside of war.

In 2020 alone the International Monetary Fund estimated that Venezuela’s economy shrank by a devastating 30% and will contract again this year by at least 10%. The scale of the economic crisis is underscored by the emergence of hyperinflation on a scale comparable to 1920s Weimar Germany forcing the unofficial dollarization of Venezuela’s economy. These events have triggered a staggering humanitarian crisis that has forced nearly six million Venezuelans to flee their beleaguered homeland since 2015. None of these developments, including the devastating humanitarian fallout precipitated by Chavez’s failed socialist experiment, have persuaded Washington to ease sanctions.

The immense gravity of the crisis now gripping Venezuela saw autocratic president Maduro recently call upon Biden to open diplomatic relations with his government and lift U.S. sanctions. These overtures, despite the many olive branches extended by Caracas in recent months, were rejected by the White House. The Biden administration refuses to negotiate with Maduro until his regime agrees to transformative changes including engaging with Juan Guaido, Washington’s recognized interim president, restoring political freedoms, and establishing a timetable for fair and democratic elections.

It is difficult to gauge whether Maduro will or even has the means of agreeing to the key elements of Washington’s stipulations. He may have outmaneuvered his political rivals in Venezuela, but the country’s socialist leadership remains under extreme pressure. That highlights why Maduro over recent months has noticeably moderated his one-time hardline stance toward Washington. That has included unilateral gestures of goodwill aimed at building political capital with the Biden administration and creating pressure to ease sanctions. The most notable of these measures were the naming of a new National Electoral Council including two opposition figures, moving six Citgo executives from prison to house arrest, and approving a UN World Food program. There are also indications that Caracas is attempting to remove illegal armed groups from Venezuelan territory, notably those designated by Washington as foreign terrorist groups.

Maduro’s desperation is easy to fathom. Despite defying harsh U.S. sanctions to strengthen his grip on power domestically by vanquishing his opponents and gaining control of the National Assembly, his position is increasingly vulnerable because of the impending implosion of the Venezuelan state. The petroleum-rich nation is nearly bankrupt. This not only is because of U.S. sanctions and the crumbling oil industry but because the Maduro regime has regularly plundered Venezuela’s gold and currency reserves to prop up the shattered economy and meet foreign debt obligations.

The disastrous economic fallout is amplified by rampant corruption with regime loyalists regularly pillaging government coffers for their own benefit. Even lenders of last resort such as the Kremlin, Beijing, and Teheran have done little to prevent the erosion of Venezuela’s all-important financial reserves or the country’s economy. The rapid decline of Caracas’ fiscal fortune forced Maduro’s regime to restructure Venezuela’s sovereign debt after defaulting in November 2017. While the regime reached an agreement with individual creditors, it remains to be seen whether Caracas possesses sufficient resources to meet Venezuela’s sovereign debt obligations unless it can gain access to international financial and energy markets. For as long as current U.S. sanctions remain in place this will not occur because of the inability to borrow from international lenders. That magnifies the complexity of the extreme economic and humanitarian crises that Caracas is being forced to resolve.

When it is considered that Venezuela’s oil reserves are the world’s largest at over 300 billion barrels the country’s deep-seated economic crisis is difficult to comprehend. With crude oil prices rallying substantially since the end of 2020 extracting those vast petroleum reserves would on face value offer an urgently needed solution. To generate interest and attract vital investment Maduro, earlier this year, stated Venezuela was open for business and seeking investment from foreign energy companies to exploit its vast petroleum reserves. Maduro even floated the idea that privately-owned energy companies could control petroleum projects in Venezuela, something which has not occurred since Chavez seized privately-owned oil assets between 2007 and 2010.