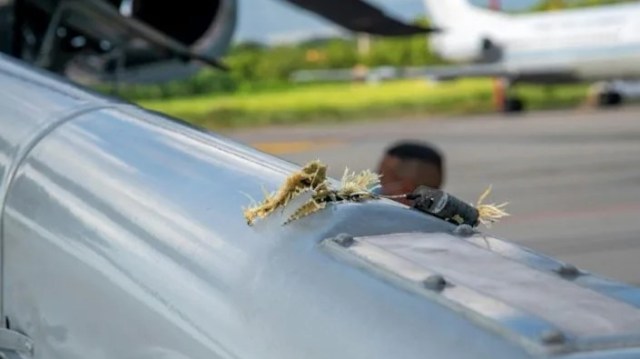 President Ivan Duque said the helicopter he was flying in Friday near the border with Venezuela was hit by gunfire in the first attack against a Colombian head of state in nearly 20 years.

No one was injured, and authorities did not say which side of the border the shots came from. Colombia regularly accuses Venezuela of harboring Colombian rebels on its territory.

“It is a cowardly attack, where you can see bullet holes in the presidential aircraft,” Duque said in a statement.

Duque said he was flying with the defense and interior ministers and the governor of Norte de Santander province, which borders Venezuela, when the helicopter was attacked.

Photos released by the president’s office showed the tail and main blade had been hit.

“I have given very clear instructions to the entire security team to go after those who shot at the aircraft,” he said.

The US, European Union and UN mission in Colombia all condemned the attack.

The presidential delegation had left the town of Sardinata and was headed to the border city of Cucuta when they came under fire.

Duque had attended an event in the Catatumbo region, one of the main coca-growing areas of the country. Colombia is the world’s largest cocaine producer.