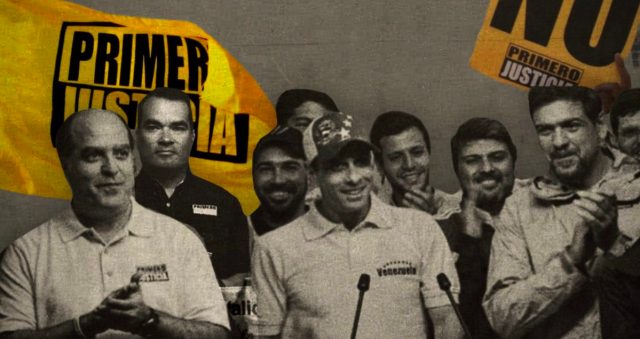 In 1992, the same year Hugo Chávez and other officers attempted to violently depose President Carlos Andrés Pérez, a group of people, mainly in academia, decided to build a citizen platform to give a new life to Venezuelan politics through democratic means. Asociación Civil Primero Justicia was an answer to the disenchantment with the country’s political elite, as well as to the conspirators in the Armed Forces. Primero Justicia (PJ) also offered an outsider option against the declining status quo. Eventually, as Chávez took the path of the revolutionary movement with a charismatic leader and an authoritarian agenda, the citizen platform became a political party in 2000.

We all know what chavismo came to be. But Primero Justicia, which rose as such a promising project and was indeed a successful party for some years, but as time has passed, they’ve become part of that status quo they originally sought to change. What happened to them?

Adding to the authoritarian context of Venezuela, the history of this party is a lesson on the prevalence of a certain culture in our political organizations where the same mistakes dismantle the spirit of renovation, again and again.

Even before its official birth date as a political party, in March 22nd, 2000, Primero Justicia was capitalizing on the image of its leaders: new names in Venezuelan politics who looked like the opposite of chavismo’s violent character, with their solid academic credentials, especially as lawyers.

Julio Borges, one of its founders, was already known because of the popular TV show Justicia Para Todos in RCTV, where he posed as an impartial judge ruling over difficult conflicts. But the TV show was just the face of a wider program of alternative resolution of conflicts for people without access to the justice system. His companions in the party, Henrique Capriles, Gerardo Blyde, Carlos Ocariz and Leopoldo López, among others, came from UCAB or from universities abroad.

PJ started off well. When it was registered as a party in Miranda, five of its deputies were elected in the first elections of the then-brand-new National Assembly. Among them, Borges, Ocariz and Blyde. Meanwhile, Capriles (who had already been a lawmaker in Congress during the previous term) and López became mayors in Baruta and Chacao, respectively. They increased the stakes in the crisis of April 2002 when, just before April 11th, PJ was registered in the Electoral Board as a national party, and its founders made a video calling on all lawmakers in the AN to resign. Soon after, PJ joined the opposition coalition of the time, Coordinadora Democrática. The kids who had just left college were now playing with the big boys.

In order to expand the organization throughout the country, the leaders of PJ focused on recruiting highly prepared people to advise them and train cadres. One of them was political scientist María Puerta Riera. In 2001, when she was teaching at Universidad de Carabobo in Valencia, she joined a group of academics who were regularly meeting people from PJ to discuss a vision for Venezuelan politics.

In one of those sessions, Puerta was invited to join the board of PJ in the state, even if she had no experience as a member of a party. She wasn’t the only one who joined the young party. “There were more professors and business people, very successful,” she remembers. She joined PJ once it was agreed she would work in Fundación Primero Justicia, created to provide political education to the grassroots of the organization. However, the party wanted her to take part in political work in the streets and run for office, so she decided to leave PJ in 2004.

“It seems that if you belong to a party you have to aspire to power, or you become a freak to the others,” Puerta Riera says. This contributed to developing a culture of caudillos. “I used to say the party had too many bosses. Everyone wanted to be a chief, but there were no single militants.” She thinks that’s exactly what old parties do, and in the case of PJ, it could have to do with the fact that, besides the well known leaders, many people in the party came from Copei, Acción Democrática (AD) and Movimiento al Socialismo (MAS), the old parties. Puerta Riera knew that among them there were many people with real intentions of changing politics for good, but they were surrounded by people who changed parties just to start over and rebrand themselves.

“That happened not only in Primero Justicia, but in all the post-Chávez parties,” she says. “People who suddenly found themselves out of their original parties thought that they could rebuild their political career in Primero Justicia. That’s fine, as long as you don’t bring with yourself the old customs that made the old parties decline. What happened is that the political culture traveled from some organizations to others, and nothing new was actually implemented.”

For instance, the new party developed the same reluctance to allow the renovation of its leadership. Twenty years later, PJ is still led by Julio Borges. So the promise of new faces wasn’t accomplished. “Inner democracy is more an aspiration than a behavior. The parties born after 1998, not only PJ but in general, are like franchises: they are managed as private brands and companies,” Puerta Riera says.

Journalist Alonso Moleiro thinks that Primero Justicia’s original project shouldn’t be considered finished. A group of new leaders is reacting to the frustrated renovation from inside the party: Roberto Patiño, Andrés Schloeter, Gabriel Santana, Marialbert Barrios or the new mayor of Maracaibo, Rafael Ramírez. Yet, if PJ is to reemerge as an alternative, it has to allow some renovation in its ranks, even if the founders remain in key positions: “Primero Justicia is risking becoming a new AD: a party with a history of democratic commitment, which delivered to Venezuela its first democratic experiment, but that ended riddled with the same habits of having a caudillo, the same secretary-general for years and years.”

According to Puerta Riera, the ideological current in PJ was “progressive humanism” and the initial work to train leaders was productive, but the arrival of old mentalities with the militants coming from other parties produced a crash of ideologies that turned into strategic differences. “This party has a strange ideological confusion. It started as a democratic Christian party, even if that wasn’t stated, because most of its founders came from that field and had ties with the Church. But Primero Justicia branched out to the Left, and it even has a side that believes in laicism,” says Alonso Moleiro.

He thinks that Borges allowed the ideological debate, as long as he had the last word on the matter, and even if he is, according to Moleiro, an “honest, studious, not very charismatic” leader, this led the party to experience one of its most important inner cracks: in 2007, three years after being re-elected as mayor of Chacao, Leopoldo López left PJ saying there was no democracy inside the party. López’s motive, however, was that he was competing with Borges to control the party. The popular mayor pushed for elections for party leadership, and Borges, making a mistake in Moleiro’s view, expelled López from the board. This is how López created Voluntad Popular two years later and took people from PJ with him.

“Borges did everything he could to prevent López from leaving, but the crisis had already exploded, and the project suffered a lot,” says Moleiro. “The party recovered, however, to the point it seemed ready to expand again, but the consecutive national crisis prevented that from happening. Today, PJ remains secluded in some spots, sometimes impoverished urban areas.”

In 2007, PJ, which was born in universities, absorbed new blood coming from the student movement that took to the streets to protest the Chávez government. Many of those new members just synced with the party’s prevalent ideology, but Moleiro points out that some of them, such as Miguel Pizarro, added leftist ideas.

During those years, PJ won the governorship of Miranda in 2008 with Capriles, while Ocariz won the mayorship of Sucre in 2008 and 2013. PJ obtained seven parliamentary seats in 2010, when it was the third party with the most votes in the legislative election. In 2012 and 2013, Capriles was the presidential candidate that got the most votes against Chávez and Maduro. In 2015, PJ won 33 seats in the National Assembly and was the party with the best performance in the legislative elections. 2015 was a very important year for the party as Julio Borges was key at organizing the strategy that brought home the National Assembly for the opposition.

In the November 2021 regional elections, even when facing a complicated election, in which the opposition participated with deep divisions and in a process controlled by the government, PJ managed to stay relevant by winning 12 mayorships and backing the new governor of Cojedes.

The cracks are still there, though. In fact, Moleiro thinks it’s three parties in one: the one led by Borges, which manages the organization; the one led by Capriles, currently an outsider in his own party, more worried about leading the entire opposition; and those who belong to the 2007 Generation.

Moleiro warns that we couldn’t talk about politics in Venezuela without taking into account the efforts made from Miraflores Palace to make all opposition parties fail, meddling in the parties’ issues, finances and inner competitions, and jailing its members when they dare to protest or denounce. Several members of PJ, such as Borges, Pizarro, Juan Pablo and Tomás Guanipa or José Manuel Olivares were forced to leave the country (the Guanipa brothers and Olivares are back). Juan Requesens was jailed in 2018. And councilman Fernando Albán was killed that year by SEBIN officers.

PJ members like Luis Parra and José Brito were recruited to protect the affairs of Alex Saab and were instrumental to the Maduro regime, in June 2020, when the Supreme Tribunal of Justice (TSJ) ruled against the party being controlled by its board and made Brito the president. The TSJ reverted the sentence some months after, but Parra and Brito created the party Primero Venezuela with the symbols and colors of PJ, and joined the National Assembly controlled by chavismo that was elected in 2020.

These are not the ordinary conditions a political party must face in other countries where there’s political disenchantment. “Primero Justicia was devoured by the complexities of forging a unity to survive under chavismo,” Moleiro says. “Not all parties have had to deal with an enemy that resorts to weapons to impose its will.”

Read More: Caracas Chronicle – There once was a party: Primero Justicia