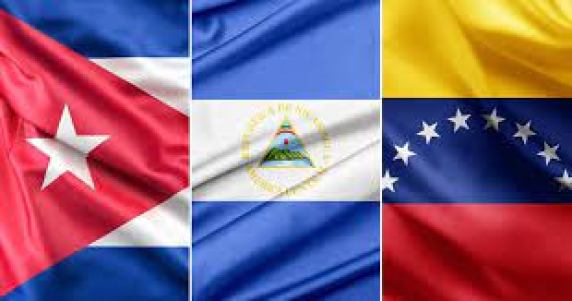 The Biden administration is unlikely to invite the leaders of Venezuela, Nicaragua and Cuba to the upcoming Summit of the Américas, a senior State Department official said Wednesday while sidestepping questions about an eventual role for Venezuela’s opposition leader at the gathering of hemispheric leaders.

The summit, to take place in Los Angeles in early June, will focus on defending democracy and human rights in the Western Hemisphere as well as addressing irregular migration, climate change and efforts to ensure equitable growth as the region emerges from the COVID-19 pandemic, Assistant Secretary of State Brian Nichols told reporters.

The top U.S. diplomat in the Western Hemisphere said invitations had yet to be sent but ventured that neither Venezuela’s Nicolás Maduro, Nicaragua’s Daniel Ortega or Cuba’s Miguel Diaz-Canel would make the cut and are considered by most of the countries in the region to be undemocratic.

“They are unlikely to be there,” he said.

When pressed, Nichols refused to say whether opposition leader Juan Guaidó – who the U.S. recognized as Venezuela’s legitimate leader in 2019 – would be asked to attend, saying only that a decision would be made “soon.”

“The White House will determine who is invited,” Nichols said.

The intrigue over Guaidó’s role comes as the Biden administration has made tentative steps to re-engage what Nichols called the Maduro “regime.” In March, three senior U.S. officials, including the National Security Council’s Juan Gonzalez, traveled secretly to Caracas to meet with Maduro. The visit was partly prompted by U.S. National Security concerns in the wake of Russia’s invasion of Ukraine, which has renewed interest in Venezuela, a close Russian ally that sits atop the world’s largest petroleum reserves.

Maduro reciprocated by freeing two American prisoners and promising to resume negotiations with his opponents. However, amid a backlash of criticism from hardliner exiles and even some Democrats, the backchanneling has yet to produce any concrete results.

Nichols said that the U.S. remains committed to bringing Maduro back to the negotiating table with his opponents but didn’t comment when asked whether inviting Guaidó would advance or hinder that goal.

“The democratic situation in Venezuela is an issue that we’ll obviously talk about and address at the summit but I’d ask for your patience while we wait for the White House to take a decision on how that invitation will be managed,” he said.

The decision to exclude Cuba’s communist government would seem to dampen hopes for some sort of reconciliation following four years of escalating tensions with the Trump administration.

President Barack Obama invited Cuba’s Raul Castro to the summit in 2015 as part of a quiet, sustained effort to improve relations between the two Cold War adversaries and Cuba’s foreign minister attended the last gathering, in Peru, in 2018, which then President Donald Trump skipped.

The Biden administration has taken a similarly harsh stance against Ortega, whose re-election last year to a fourth term Nichols called a “sham” after numerous of his rivals were jailed.

The U.S. is hosting the Summit of the Américas first the first time since 1994, when President Bill Clinton hosted regional leaders in Miami to push for a free trade agreement stretching from Alaska to Tierra del Fuego.

But with that ambitious goal abandoned long ago amid a rise in leftist, anti-American politics in several parts of the region, many experts have questioned the need for an expensive gathering of more than 30 heads of state each pushing their own bilateral agenda with Washington but often cooperating little amongst themselves.

The region in recent years has diversified its trade and diplomatic ties and the U.S. has largely stood by as Russia, China, Iran and other foreign powers hostile to the U.S. have gained influence.

Nichols praised the region for mostly joining the U.S. in condemning Russia’s invasion of Ukraine. But he said massive supply chain disruptions triggered by the conflict had stirred concerns in the region about the future of energy and food supplies.

“How do we address that to make sure that the people of our hemisphere can afford the food that they need to put on their table every night?” Nichols said. “These are crucial issues and that’s why our leaders are coming together.”