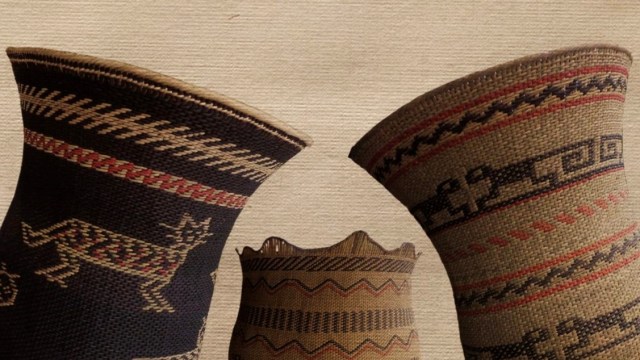 While mining profoundly damages the environment and culture of the Caura basin, a Yekuana craftswoman organized the women in her community to produce and sell their weaving in Venezuela and abroad. Meet the unstoppable Dawa.

She was named Dawa, “mother of yucca,” by her great grandmother Jöjömeyeü. She was also named Luz María by the nun who presented her in the state registry. She was born and raised in Siwitiña, a place by the Caura River, deep in Venezuela’s rainforest, that appears in the maps under its Christian name, Santa María de Erebato. Now, Dawa lives in the town of Maripa, where the Caura meets the Orinoco, several hours south of Caracas, where she must travel once in a while to sell her community’s craft and tell their story.

– I’m Yekuana and I witnessed when the mining started.

From 2002 to 2004, Dawa was living in El Playón, a community in the middle of the Caura basin where a waterfall keeps the fish from down and up the river apart, but can’t stop the men. In those years, as she remembers, two Yekuana men from other communities went to the mountain by the Yuruani River searching for gold. They found it, and went to Maripa to tell the others.

– So the Yekuana from Maripa began to arrive. They came to exploit, they live off of money, not the land. With them came the criollos (non-Indigenous) from Maripa, and using force.

Then, Dawa understood that what she had dreamt of in 2004, that El Playón was invaded by the National Guard, was happening in real life. In Venezuela, with the Mining Arc program, the Maduro regime gave the Armed Forces the job of protecting and exploiting the mines, even in protected natural areas such as Caura. In the past, the role of the military was to prevent miners from entering those sites and threaten nature and Indigenous communities.

– In 2006, El Playón was invaded with miners and policemen, and the communities started to think about how to get the miners out, because there were too many of them and they destroyed El Playón. That year, a police officer killed Chief Marcelo, thinking he had gold. Marcelo was my uncle. The Yekuana reacted and reported it to the government, and in that moment they ordered the miners to leave and the mining activity decreased.

The death of the chief marked the decline of artisanship and the beginning of something else.

– Marcelo organized things to sell our crafts. After he died, no one else took that job, because Arco Minero had started: the criollos came with the big industry and took our territories.

– People believe that going to work at the company is only mining gold, but there are drugs, guerrillas and gangs, illegal people fighting each other for our land, almost killing us in the process. Now it’s a lawless territory, it became unsafe and nobody knows what is happening to the Yekuana people.

That lawless territory is Dawa’s home and backyard, and also one of the forest reserves that Venezuela declared protected in 1968, the same area that Chávez ordered to preserve with the Plan Caura forty years later and lost all protection in 2017 when it paradoxically became a National Park where mining was allowed after a new land planning strategy in 2018.

– They didn’t consult with us. Our rules say that no sacred mountain can be exploited. We don’t cut trees just for the sake of it. After we make the conucos (the traditional low-scale subsistence crops), we wait around ten years to allow the soil to recover. It’s an ordained system where we have to make conucos without damaging the land. We don’t mine, we don’t agree with that. If we betray our rules, as my great grandma said, we won’t be okay. We won’t have territory and home.

So the land planning strategy for the country’s most extensive national park disturbed the ancestral laws that rule the honor code, the very complex social order and the sacred life of one of the Indigenous communities living there, expert weavers and navigators Yekuana, “the people of the water”. The plan didn’t even consider the legal protection these communities have according to the Constitution chavismo fought to approve in 1999.

– They are destroying it because the Caura isn’t their home, but this is our habitat… Sometimes we go to the Indigenous Ministry and they don’t help us either.

Dawa tells and retells in Spanish. Who would imagine that the conciliatory language the Spanish nuns and priests taught her would become the language of conflict, defense and negotiations with the non-Indigenous world.

– After all this happened, some women believed that we couldn’t sell our crafts anymore, because we were only selling them to the tourists in El Playón. The only ones who used to appreciate our art were the ones coming from faraway. Most Venezuelans said, and still say, “that is craft, that is cheap,” and we stopped making it, and we were forgetting to weave our baskets with figures, until I came and started to push our people into making them again.

Dawa is the Yekuana representative in the Network of Indigenous Craftswomen, which is quite an achievement: because of “some foreigners who came to Caura” with Fundación Tierra Viva, Fundación Finatura and funds from the European Union for a project of Indigenous women entrepreneurship, Dawa learned to value their work, about fair trade and how to price every piece made by her people. Most of all, Dawa learned that the baskets made by Yekuana women can weave a relationship between them and the criollos.

So the team of two master weavers became a network of sixty women that organized themselves to teach each other and preserve the tradition. Some apprentices joined the group. Dawa is very proud.

– I believe in our potential, in being together, in organizing the women, because I saw how the men do a lot of meetings but few real actions, and end up joining the miners, taking their women with them. The criollos going to the mines are bad people, not the kind Yekuana people can have a life project with. The youngsters don’t want to study at the Indigenous University in Tauca, close to Maripa, and are also going to the mines. No one wants to make conuco. But I believe women are the trunk to preserve our traditions, because we keep the conuco, we produce nourishment, and we educate our children.

Once, her great grandmother asked her: “If you can’t weave, how are you going to live your life?”

This is how her education started. Dawa found no answer when she was playing with a tiny basket, but when she learned to make it and carry her life and the lives of her people. She learned to make the basket that follows the shape of her back and can carry the yucca and lumber from the conuco, or the salt and the soap from the village; the oval basket to keep her ceremonial makeup and the sacred family objects; the round basket with a lid to save her most intimate things.

Dawa is answering that question her great grandmother asked her, by tying her life to the ancient life of her people, and struggling to preserve the prestige of the Yekuana community as the great artists of the Venezuelan Amazon. As any other Indigenous nation in the region, Yekuana women weave knowing the use, the aesthetics, the proportion, and the myths behind the figures that emerge, with unexpected elegance, in their baskets.

– The basket is essential for us. Everything we use every day is still being weaved, because we need it. That hasn’t been lost. I also believe that weaving the baskets is our own millenary identity, not invented or appropriated, something that came from this specific place in Venezuela.

This is why the Yekuana baskets are going to be exhibited in one of the world’s most prestigious fairs for young designers, Salone Satellite di Milano, in June. And Dawa is going with them, invited by the curator, NYC-based Venezuelan designer Rodolfo Agrella.

– My hands and my wisdom converge in my weaving, because I’m weaving my life’s path… I think I’m doing the right thing for my community, but I fear that my last dream will come true just like the others: some people will come and will take two or three years to start a massacre in the Pará waterfall, where they built a port for the mine. I told the wise people of my community, and they stared at me, just like you.