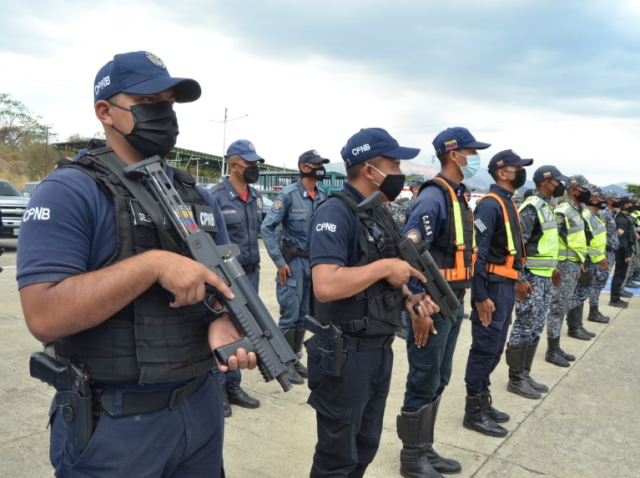 The “security operations” (policing general round ups) that have been led by organizations such as the Bolivarian National Intelligence Service (SEBIN), the General Directorate of Military Counterintelligence (DGCIM) or the Special Actions Forces (FAES) of the PNB (Bolivarian National Police) throughout the country, have been questioned since their implementation some years ago when they started with the infamous OLP (Operation for the Liberation of the People), up to “Operation Thunder III” (Operation Trueno III), recently deployed in Guárico State.

Citizens who would in no way identify themselves for fear of reprisals, reported that their loved ones murdered in the municipalities of José Tadeo Monagas, José Félix Ribas and Leonardo Infante, were not part of the “Tren del Llano” (chavista government created teamsters to control labor unions in the plains railway) turned into a mega-gang that continues committing crimes with total impunity, despite of the efforts of Nicolás Maduro’s to dismantle it.

“They enter the houses without any warrant, they search the entire house, as well as the cell phones. If there are people with a criminal record, whether or not they are linked to the gang, they are executed. They are all being linked to the band and that is not the case. Officials shoot and then find out. They come only to kill,” point out those affected.

Furthermore, abuse of power reigns, raids without court orders or arbitrary arrests, while family members must keep their mouths shut so as not to also be part of the red figures (killings or deaths).

“They are always there without escape. When you go out shopping, you see them mounted in the patios, inside the houses. They recently searched these houses and killed two. Nobody denounces them because people don’t know what to do. I am nervous for my children. One is in Tucupido (Ribas Municipality) and cannot leave. They check every telephone,” said an inhabitant of the capital of the El Socorro Municipality.

It should be noted that these complaints were corroborated by the NGO “Organización de Familiares de Víctimas de Ejecuciones Extrajudiciales” (Organization of Relatives of Victims of Extrajudicial Executions, Orfavideh), which pointed out that there are mothers suffering for the crimes committed by these terror organizations such as the SEBIN, the DGCIM or the FAES, which dispense justice at their whim.