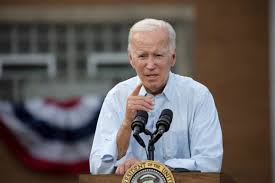 You know, the same Venezuela whose President Nicolás Maduro still has a $15 million State Department bounty on his head for unqualified “narco-terrorism” (despite that being primarily the domain of U.S. allies in neighboring Colombia).

The same Venezuela that Washington has spent years relentlessly denigrating, sanctioning, and attempting to overthrow. The same country whose leader Western allies attempted to replace with an opposition figure, Juan Guaido, whom they all constantly referred to as “Venezuelan Interim President Juan Guaido.”

And now, suddenly, the Biden administration has just decided to loosen sanctions against Caracas in exchange for Chevron going in and grabbing the country’s oil for the U.S. market.

Biden was elected in part on a promise to kill off the Keystone XL pipeline that was set to run from Canadá to the Gulf of México. This cornerstone of North American economic sovereignty and energy independence sure would have come in handy right now amid the global energy crisis. Instead, Biden offered it up as a sacrifice to the climate change fanatics who have deputized themselves to police the planet for everything from gassy cows to carbon footprints.

Today, Europe is scrambling to replace the cheap Russian fuel that powered its economy and allowed it to rival the U.S. on the global economic playing field. Having decided to stick it to Russian President Vladimir Putin amid the Ukraine conflict by foregoing their main energy supplier, they’ve since been scrambling for replacements. North América should have been in a position to profit from the situation and to help out their allies. But because of Biden, it wasn’t.

You’d think that Biden would have at some point this year turned to Trudeau and expressed renewed interest in firing up the Keystone project as energy prices soared. After all, the project is a perfect fit for the Biden administration’s new strategy of “friendshoring” – the notion of limiting supply chains to trusted partners, as introduced by Treasury Secretary Janet Yellen over the summer, as a means of depriving global competitors like China and Russia from benefits of Western economic cooperation.

In case Biden hasn’t noticed, the climate change agenda has already flown out the window in Europe along with its energy security. Desperate to replace Russian fuel, Germany is firing coal plants back up

while citizens are chopping firewood as household energy costs start to bite. The European Union itself has conveniently reclassified previously “dirty” energy, like nuclear and gas as “green”, as France has been scrambling to revive its rusting and decommissioned nuclear energy plants. And despite bragging about cutting itself off from Russian oil, Britain and Europe have both been using ship-to-ship transfers of oil from Russian tankers to those flagged under “friendly” countries in order to sufficiently launder it for public opinion purposes.

They’ve also been importing Russian fuel commingled with oil of other nationalities from other countries like China, according to various press reports.

The fact that the U.S. and Canadá aren’t in position to step in and help is, quite frankly, pathetic. Other than the elite European geniuses who cut off their own main energy source, the biggest economic loser in all this is Canadá, caught flat-footed in the pivot back to a fossil fuel future despite literally floating on oil. In the wake of Biden’s election and the Keystone kill off, Trudeau did little more than whine. The prime minister raised Canadá’s disappointment with the United States’ decision on the Keystone XL pipeline. A statement from Trudeau’s office read, “The prime minister underscored the important economic and energy security benefits of our bilateral energy relationship, as well as his support for energy workers.”

As America’s top energy supplier, you’d think Trudeau would have tried using a bit more leverage instead of shrugging it all off like a store clerk had just told him the last Xbox had been sold.

Does Venezuela have some kind of magic technology to eliminate the climate change impact of its oil? If Canadá doesn’t, then it’s hard to imagine that cash-strapped Venezuela would fare much better. But Venezuela, being sanctioned to the hilt and in desperate need of relief, is certainly a more vulnerable target for exploitation than Canadá is. Hey, with any luck maybe they’ll just give the fuel away.

Funny how quickly all the sanctimonious “Western values” get swept aside when economic viability is at stake. Washington and its allies no doubt see this as an opportunity to exploit and control Venezuelan oil to their benefit, and to eventually pick off a key Russian ally in Latin América.

Suddenly “terrorism”, human rights, and climate change don’t matter as much. Unless, of course, one considers the possibility that they never did, and have only ever been useful tools in the battle for global economic supremacy.